Under various types of government deficits, primarily, there are four types of deficit in India.

Revenue deficit includes only such transactions that affect current income and expenditure of government. This means government is using savings of other sectors of economy to finance its consumption expenditure. This implies it will have to borrow to finance consumption also (along with investment). The revenue deficit is usually represented in percentage of the GDP.

Budget deficit is the overall type of deficit. It means the excess of total expenditure over total revenues. Budget deficit includes both capital and the revenue items mentioned in the receipts and expenditure.

The term ‘deficit financing’ is used for filling this deficit only.  The Budgetary deficit is financed either by borrowings, taxation, or printing money.But Governments have largely relied on borrowings for financing the budget deficit, hence, giving rise of Government Debt.

The difference between governments’ total expenditure and total receipts, excluding the borrowings is known as the fiscal deficit.

Non debt creating capital receipts are those which do not give rise to debt, as the name itself suggests. For instance, loan recovery and PSU proceeds from disinvestment in the Public Sector Undertakings.

It should be noted that, revenue deficit is a part of fiscal deficit.

Fiscal deficit is financed by borrowings. therefore it also indicates total borrowings from all sources. If there is a large share of revenue deficit in the total fiscal deficit then it means that a large part or amount of the borrowings are being used to finance just the consumption requirements. This paints a grim picture for the public finance in the country.

While Fiscal deficit indicates total borrowings by Government from all sources. Budget Deficit only indicates government’s borrowings from RBI.

Fiscal deficit is widely used a summary indicator for macroeconomic effect of the budget in many industrialized countries. The IMF uses this measure as a principal policy target in its programmes. India began the reporting of its fiscal deficit only after 1991.

It is defined as fiscal deficit minus the interest payments. This is basically gross primary deficit.

Primary deficit excludes the burden of previous debt and only shows the net increase in the government’s Debt that is due in the current fiscal year. Therefore, a reduction in the primary deficit means the government is following policies to bridge the fiscal gap during the financial year. 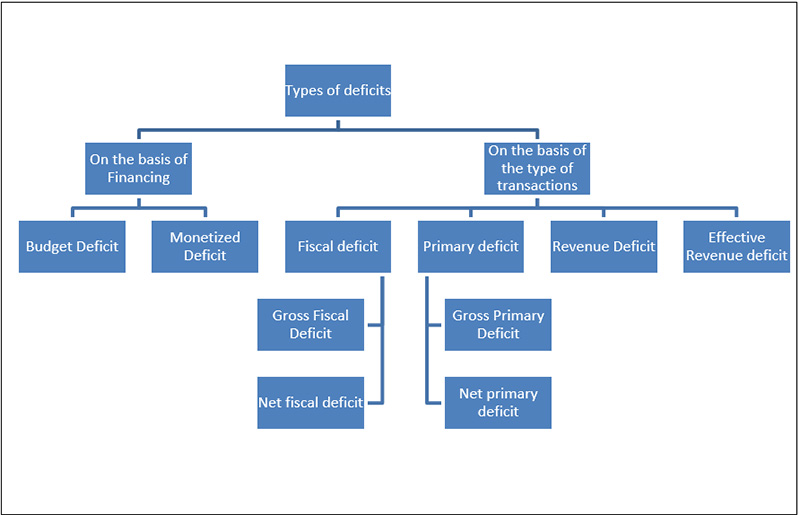 << Read about List of Bharat Ratna award winners till date >>

It refers to the method of Government that is followed to meet the excess of expenditure over income in its budget. Generally, deficit financing can be achieved through borrowings from market, borrowing from the RBI or drawing from the government cash balance held by the RBI.

<<Read about the Peasant movements in India here>>