The Chalukyas ruled from 543 to 755 A.D. in the area of Western Deccan. Pulakeshin I was the founder of the Chalukya dynasty. They remained a dominant power in the Deccan during sixth to eighth century AD.

Pulakeshin I established a small kingdom in western Deccan with Vatapi or Badami as its capital (located in present day Bijapur district of Karnataka). He performed Ashwamedha sacrifices also.

The Aihole inscription composed in sanskrit by his court poet Ravikirti has praises of Pulakeshin II. He is said to have overthrown Kadambas at Banavasi, and compelled the Gangas of Mysore to acknowledge his suzerinity. Pulakeshin II defeated Harshavardhan’s army at Narmada checking his advance in Deccan.

He fought twice with the Pallavas, in his first expedition, he defeated King Mahendravarman I and wrested the Krishna-Godavari region from him (later this region came to be known as Vengi).

Kirtivarman II: He was the last Chalukyan ruler. He was defeated by Dantidurga, the founder of Rashtrakuta dynasty.

The Chalukya Kingdom was a highly centralized administration unlike the Pallavas and Cholas. There was no village autonomy.

Chalukyas had great Maritime power, Pulakeshin II had 100 ships under his control along with a small standing army.

The Chalukyas were Brahmanical Hindus who gave importance to Vedic rites and rituals. While, they also respected other religions. 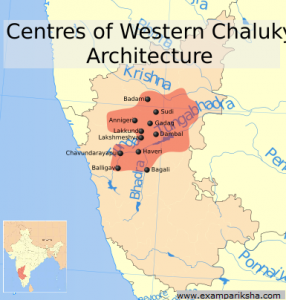 Hiuen Tsang mentions about decline of Buddhism in western Deccan, while Jainism progressed. Ravikirti, the court poet of Pulakeshin II who wrote the Aihole inscription was a Jain.

1. Aihole temples of Chalukya Dynasty: (town of temples because 70 temples)

Muktheeswara temple and Melagulti Sivalaya. There are four rock-cut temples at Badami.

There are total ten temples in Pattadakal.

P.S. In seventh century, Arab armies that invaded Persia and forcibly converted large number of Zoroastrians. In eighth century early, many fled by sea to western Chalukyan India and were given asylum. The descendants of these Zoroastrians are members of present-day Parsi community.

<< Read about Rivers in India here >>