The Rashtrakutas rose to power between 6th and 10th centuries among the dynasties of south India. According to popular belief they were of Kannada origin. Their capital was Malkhed near Sholapur. The geographical position of Rashtrakutas led to their being involved in alliances as well as wars with both their northern and southern neighbouring kingdoms. It has been recorded that the earlier rulers of Rashtrakuta dynasty were Hindus but later rulers were Jains.

Dandidurga, the founder of Rashtrakuta Dynasty:

The founder of Rashtrakuta dynasty was Dantidurga(752-756 AD) who defeated Gurjaras and captured Malwa from them. He later Annexed Chalukya kingdom by defeating Kirtivarman II.  At that time in history if Indian Sub-continent, the Pala dynasty and the Pratihara dynasty of Malwa.

Krishna I of Rashtrakuta Dynasty

Krishna I was son of Dantidurga. He was a great conquerer who defeated the Ganga dynasty and the eastern Chalukyas of Vengi. He further expanded the boundaries of the Rashtrakuta empire. He is most remembered for commissioning the Rock-cut monolithic Kailash Temple at Ellora.

Next important ruler of Rashtrakuta Dynasty was Govinda III who won over several North Indian Kingdoms. He extended the Rashtrakuta empire from banaras to broach and from Kannauj to cape comorin. It was during his time that the tripartite struggle for control over Kannauj was at peak between the Palas , the Pratiharas and the Rashtrakutas.

He was the successor of Govinda III. Amoghvarsha is considered the greatest ruler of Rashtrakuta Dynasty who ruled for 64 long years. He was a devout Jain, who was initiated into Jainism by Jinasena. Amoghvarsha was a patron of art and himself authored “Kavirajamarga” in Kannada language.  Amoghvarsha I is credited with establishment of the Rashtrakuta capital at Malkhand or Malkhed situated in present day Gulbarga district of Karnataka. It remained the capital of Rashtrakuta empire till its collapse.

He assumed the title of Viranarayana after defeating the Eastern Chalukyas. His reign was peaceful otherwise, which supported and enriched the arts, literature and religion in the empire. He was a religiously tolerant ruler who took keen interest in arts and literature while maintaining peace in his empire, for this reason he is often referred as the “Ashoka of South”.

Krishna II was the successor of Amoghavarsha I. His reign saw revolts from Eastern Chalukyas, and hence the size of empire was reduced.

He consolidated the empire which had become scattered due to series of weak kings prior to him. Krishna III defeated the Cholas in Battle of Takkolam and captured Tanjore. He expanded further to Rameshwaram. He also  built Gandmartandamitya and Krishneshwara temple at Rameshwaram. During his reign the great kannada poet Ponna rote Shantipurana.

The last ruler of Rashtrakuta dynasty was Karka II.

The provinces under Rastrakutas were known as ‘rashtras’ and they were under control of ‘rashtrapatis’. These rashtras were divided into ‘vishyas’ that were governed by ‘vishayapatis’. Next Subdivision under the Vishyas was bhukti which consisted of fifty to seventy villages under bhogapati(directly appointed by the central government). The Village assemblies played a significant role in carrying out the administration of village.

Society and Economy of Rashtrakutas:

Vaishnavism and shaivism both were prominent religions in the Rashtrakuta reign. While one third of the population was following Jainism. There were many properous Buddhist settlements in Kanheri, Sholapur and Dharwar.

The centres of learning also flourished at places in under Rashtrakutas. A college at Salatogi in Bijapur district was run by income from endowments made by rich people  and  villagers on occasion of functions and festivals.

The trade and commerce between Deccan and Arabs. The Rashtrakutas maintained good relations with Arab traders.

Art and Culture during  Rashtrakutas :

They patronized Sanskrit literature. Under the Rashtrakutas, Trivikrama wrote ‘Nalachampu’, Halayudha wrote ‘Kavirahasya’ under the reign of Krishna II.

The Rashtrakuta architecture is exemplified by Ellora and Elephanta.

The cave architecture reached its excellence in the Kailashnath temple at Ellora. 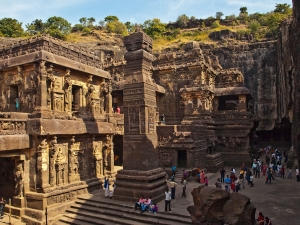 It was built under Krishna I. This temple is carved out a massive block of rock that is 200 feet long and hundred feet width and height. It has four parts in all- the main shrine, entrance gateway, intermediate shrine for Nandi and a mandapa surrounding the courtyard. The height od the Kailash Temple at Ellora is 25 feet, endowed with elephant and lion figures. The three-tiered Shikhara resembles Shikara of Mammalapuram Rathas. The most significant part of the temple is its scultures which make this Kailash Temple an architectural marvel. It has sculpture of Durga slaying buffalo demon. Another sculpture has Ravana attempting to lift Mount Kailash. There are scenes from Ramayan carved out on the walls of the temple. This temple is considered a piece of Dravidian style of Architecture.

<< Read about the Rivers of India for quick revision here>>

The Elephanta Caves of Rashtrakutas: 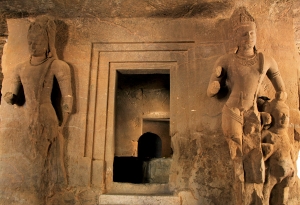 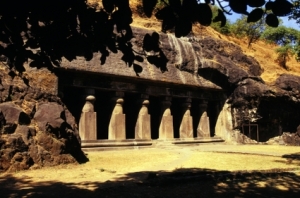 Elephanta caves situated at an island near Mumbai, were originally known as Sripuri. The Portuguese later named it  so due to the large Elephant sculture it had. There is a close similarity between the Ellora temple and Elephanta caves depicting continuity of craftsmen. The entrance of the elephanta caves has huge figures of dwra-palakas at the entrance. The wall surrounding the prakara around the Sanctum has sculptures of – Nataraja, Gangadhara, Ardhanareeshvara, Somaskanda and Trimurthi(six metre in height, representing the three aspects of Shiva- creator, preserver, destroyer).

<< Click here to read about the Bharat Ratna receipients till date>>