After the decline of Gupta Empire, there was disorder on political front in India. In the beginning of 7th century BC, Harshavardhan established a large kingdom in Northern India.

Sources for Study of Harshavardhana’s Reign:

Harsha ruled over a vast territory consisting of eastern Punjab, Uttar Pradesh, West Bengal, Bihar, Orissa under their control. Nepal had accepted his overlordship. Harsha defeated the ruler of Kannauj and made Kannauj his new capital.

Most important battle fought by Harshavardhan was against Chalukyan ruler Pulakeshin II with the ambition to extend his empire beyond Narmada. Aihole inscription of Pulakeshin mentions that Harsha was defeated.

The administration during Harsha’s reign was similar to that of the Guptas. Hiuen Tsang has described it in much detail.

Economy and Society during Harsha’s rule: 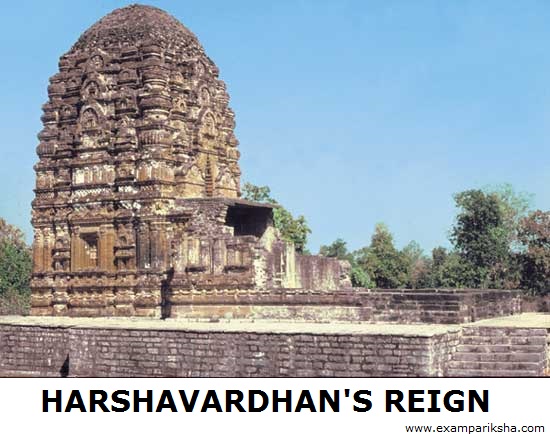 Harshavardhan was a Shaiva follower in the beginning but gradually embraced Buddhism. He was a tolerant ruler. It is believed that Hiuen Tsang converted him to Mahayana Buddhism. Harsha prohibited animal slaughter for food in his kingdom. He also erected various Stupa and established travellers’ resthouse all over his kingdom. He conducted a gathering of representatives of all religions once in every five years. Two of them are important:

<< Read about The powers of Prime Minister in India here>>