The plant community left undisturbed over a long time to adjust themselves to climate and soil conditions – natural vegetation.

They are found in warm and humid areas, annual rainfall over over 200 cm, mean temperature is 22 degrees celcius

They are present in less rainy areas. The mixture of evergreen and moist deciduous trees which have under-growing climbers give evergreen character. They have White cedar, Hollock, Kail, etc.

Britishers replaced the oak forests in Garhwal, Kumaon with Pine(chirs) which was needed for railway lines.

It is most widespread called Monsoon forest. It is It occurs in rainfall of 70-200 cm. There are two types of deciduous forest, moist and dry.

Ranges from tropical to tundra with altitude. At the foothills, it is deciduous and wet temperate type of forest at 1000-2000m. Oak and Chestnut in West Bengal , Uttaranchal hills.  At 1500-1750 m , there are pine forest, Chir pine commercial tree, deodar endemic specie on western Himalayas used in construction. Chinar and walnut in Kashmir.

At 2225-3048 m, Blue pine, spruce, temperate grasslands. At higher altitude there is alpine forest and pastures.

The natural vegetation of littoral and swamp type is 70% wetland under paddy. Total 3.9 million hectare wetlands. Two protected water-fowl habitats under (Ramsar convention) and the convention of wetlands of International importance(among UN members).

Eight categories of wetlands in India:

They are also found in Mahanadi, Godavari, Krishna deltas.

Forest area is the notified area as forest land irrespective of existence of trees. 23.28% based on slate revenue department records. Actual forest cover is the area occupied by forest with canopy, 20.55% based on aerial photographs and Satellite imageries. 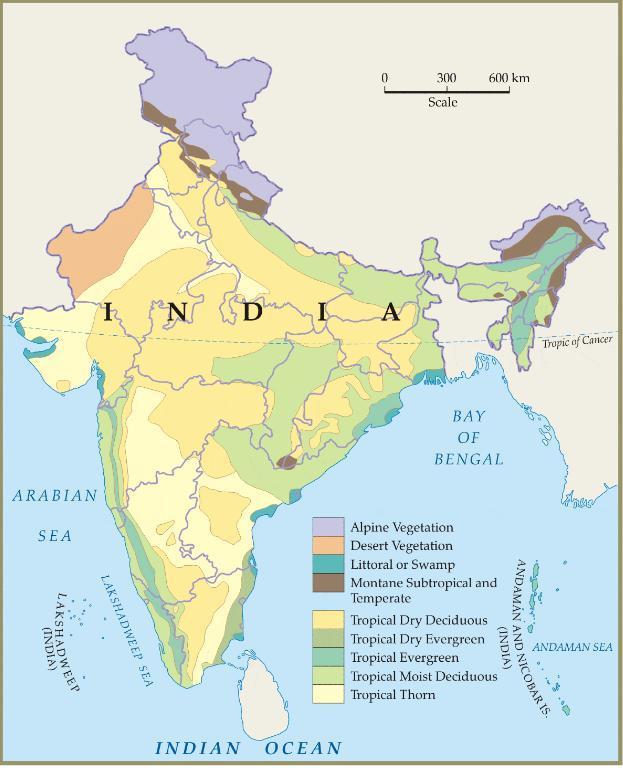 Types of Natural Vegetation in India

Forest have intricate interrelationship with life & Environment. The natural vegetation has numerous direct and indirect advantages to economy and society.

<< Read about list of Council of Ministers in Union cabinet here>>