After Sangam Age in Tamil country, Kalabhara rule for 250 years. The, Pallava kingdom in Tondaimandalam and capital at kanchipuram.

Origin of Pallava is disputed while many consider them to natives. Issued earlier inscriptions in Prakrit & Sanskrit. patronised Brahmanism.

Simhavishnu – real founder of Pallava dynasty. He was a great ruler, who defeated Kalabhras, Cholas to extend territory till Kaveri .

Mahendravarman I (600-630 A.D.): Conflict between Pallava -Chalukya began. Pulakeshin II marched against them & captured northern part of kingdom. He was a Jain follower but converted to Saivism after being influence of Saiva saint, Tirunavukkarasar/Appar.

He is considered a builder of cave temples, built temples for Brahma, Vishnu and Shiva. He also promoted art and music. 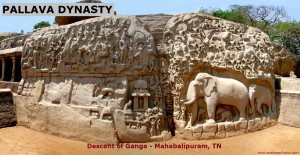 Defeated Pulakesin II of western Chalukyas in Battle of Manimangalam near Kanchi. He captured and destroyed the capital city of Vatapi. He then assumed the title ‘Vatapikonda’. He led a navla expedition to sri Lanka.

During his reign, Hiuen Tsang visited Kanchipuram. He called it big and beautiful with one hundred Buddhist monastries with ten thousand buddhist monks. Ghatika at Kanchi was great centre of learning.

Narsimhavarman I was the founder of Mamallapuram and monolithic rathas.

His rule was peaceful and offered ample opportunities for development of arts. Shore temple at Mamallapuram and Kailasanatha at Kanchipuram.

Dandin was a court poet of Rajasimha. Narsimhavarman II sent embassies to China. Maritime trade flourished during his reign.

Parameshwaravarman II and Nandivarman II were the successors of him.

Pallava rule lasted till 9th century A.D. Aparajita was the last Pallava ruler was defeated by Aditya I of Chola dynasty.

Sate divided in kottams (administrated by officers of king). They has well trained army. Land grants to temples were called Devadhana. To Brahamanas the land grants were called Brahmadeya. No tax was charged for these land grants.

Irrigation was a responsibility of the State. Construction of irrigation tanks at Mahendravadi and Mamandor during Mahendravarman I’s reign.

The land tax was the primary source of government revenue. The Village Sabhas maintained he village land records , local affairs and temple management.

Tamil society under the caste system became rigid. Brahmins were given a high place. The period saw rise of Saivism and Vaishnavism, while Buddhism and Jainism declined.

Education and Learning during Pallava Rule:

The Ghatika at Kanchipuram was a popular centre of learning. Various noted pupils of Ghatika  were – Dandin( Sanskrit writer in Narsimhavarman I’s court), Bharavi( Sanskrit scholar in time of Simhavishnu), Dharmapala( who later became the head of Nalanda), Dinganaga( Buddhist writer ), Mayursarman( Founder of Kadamba dynasty who studied vedas in Kanchi).

Pallavas introduced the art of excavating temples from rock. They began Dravidian style of architecture. Pallava temples were constructed in four different styles: 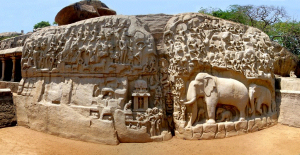 At Mamallapuram, there is an Open Art Gallery where the ‘descent of ganga’ or ‘Kirtarjunia’/ Penance of Arjuna (UNESCO World Heritage site) is depicted. This is also known as the ‘Fresco Painting in Stone’.

<< Click here to read about Geography Study Material On exampariksha >>