Absolute Humidity – actual amount of water vapour present in the atmosphere. It is measured in grams per cubic metre.

Moisture in atmosphere comes from –

Ability of air to hold water vapour depends entirely on its temperature.

Relative humidity – percentage of moisture present in atmosphere as compared to its full capacity at a given temperature. It is greater over the oceans and least over the continents.

Saturated air – That air which contains moisture to its full capacity at a given temperature.

Dew point – Temperature at which saturation occurs in a given sample of air is known as its dew point.

Latent heat of Vaporisation – Temperature at which water starts evaporating.

Condensation – It is transformation of water vapour into water. It is caused by loss of heat.

<< Read about the Chola empire in Indian history here>>

Dew in the atmosphere:

Clouds are a mass of water droplets or crystals of ice of minute size located at considerable elevations. These clouds take up various shapes and sizes. This allows for the study of different types of clouds to understand the behaviour of water in atmosphere. 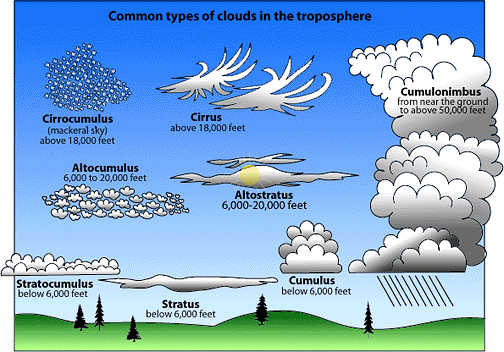 Precipitation : release of moisture after condensation.

Hailstorms: Released as raindrops, pass through colder layers so freeze before reaching the surface.

According to its basis of origin, rainfall is primarily classified into 3 major types:

Cyclonic rain: The rains occurring due to extra tropical cyclones.

The water in Atmosphere is eventually falls on Earth in form of precipitation, The pattern of precipitation regimes is helpful in understanding the distribution of rainfall.

There is even distribution of rainfall ocurrs in equatorial belt and western parts of cool temperate regions.

Rainfall is more over ocean s than land.

Heavier rain on eastern coast and decreases towards west – between lattitudes 35 degrees and 40 degrees north and south of equator.

Due to westerlies, first rainfall on western margins of continents and it goes on decreases towards east of 45 degrees and 65 degrees N and S of equator.