Air in horizontal motion is Wind, And Atmospheric Pressure determines the rise and sink of air. The pressure and winds in atmosphere determine formation of air masses and occurrence of storms.

Due to gravity, air at surface is denser and has higher air pressure. It is measured by the mercury barometer or aneroid barometer.In lower atmosphere, pressure decreases rapidly with height. At sea level, average atmospheric pressure is 1,013.2 milibar.

<< Read about the Federal structure of Indian Constitution here>>

The following pressure belts oscillate with the apparent movement of sun. In northern hemisphere in winter, they move southwards and in summers northwards.

Factors affecting velocity and direction of Wind in Atmosphere:

Air motion due to differences in atmospheric pressure is known as Wind. From high pressure to low pressure. At sphere, wind gets friction due to pressure gradient force – Coriolis force and gravity.

<< Read about the Mauryan Empire in Indian History>>

IV. Pressure and Wind in Atmosphere :

The Pattern of planetary pressure and winds in atmosphere, depends upon the following:

This Pattern of movement of planetary winds is called General circulation of atmosphere. It sets in motion the ocean water circulation which influences the Earth’s climate. The following diagram explains the patterns of atmosphere circulation very clearly. 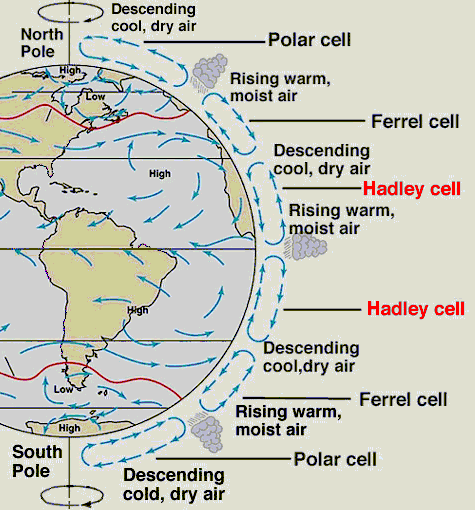 I. Inter Tropical Convergence Zone (ITCZ) at equator. Zone of low atmosphereic pressure and ascending air. Rising air currents are due to global wind convergence and convection from thermal heating(which causes low pressure). The converged air rises along with convective cell and reachs upto 14 km. Then it moves towards poles. This accumulates air around 30 degrees North and South.

II. Subtropical highs – The part of accumulated air sinks to ground to form subtropical high. The air sinks because it gets cooled down when it reaches 30 degrees North and South.

III. Easterlies(come from east) – Near land surface, air flows towards the equator, this is known as easterlies. These Easterlies converge from North and South at equator at ITCZ. This forms the Hadley cell in tropics. 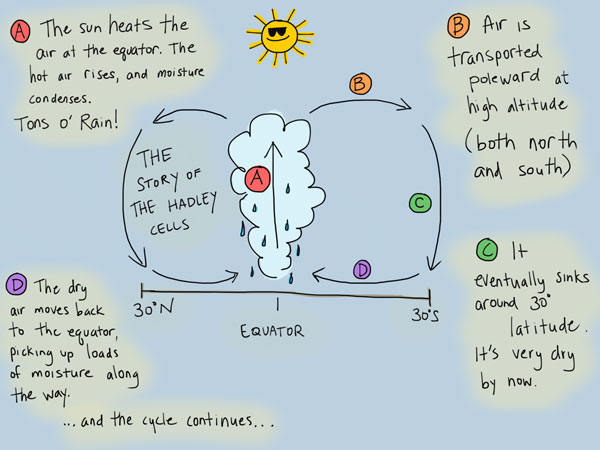 This change in pressure condition over Pacific is known as Southern Oscillation. The combined effect of both these is known as ENSO. When ENSO is strong, that year large scale variations are seen in weather around the world.

<< Read about the provisions of Kisan Vikas Patra here >>

We hope this short compilation for quick revision of Pressure and winds in atmosphere is useful for aspirants. If you want us to make any further additions to the article, please feel free to mention them in the comments below.