All the water on Earth including the oceans, seas, lakes, lagoons, rivers, ice and glaciers, water in atmosphere is called hydrosphere. There is more water in the Southern hemisphere as compared to Northern hemisphere.

Hydrological Cycle – Circulation of water within the Earth’s hydrosphere in different forms is known as Hydrological cycle.

The water resource in Oceans is maximum at 71% of the planetary water.

Availability of Water on surface of Earth :

Processes of water cycle and its components :

Since the oceans are confined to great depressions of earth’s outer layer. The major portions of ocean floor is found between 3-6 km below the sea level. These ocean floors are rugged with the world’s deepest trenches, largest mountain ranges and the largest plains. All these features are formed by the tectonic, volcanic, and depositional processes.

Division of the Ocean Floor:

A vital property of the water resource in oceans is its temperature. The variation in temperature cause various form of activity in the oceans. Let us first look into the factors that affect this temperature distribution.

<< Read about the process of Government budgeting here >>

The temperature-depth profile for water in ocean shows how temperature decreases with depth. It shows a boundary region between the surface waters of the ocean and the deeper layers.

Thermocline– The boundary line shown by the boundary region between surface waters of ocean from where there is a rapid decrease of temperature. 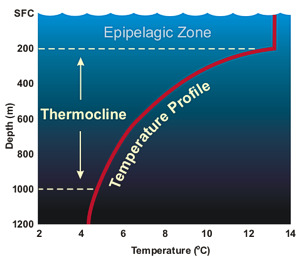 90% of total volume of water is found below the thermocline in deep ocean. 100-400 m below the sea surface.

The temperature structure of ocean is divided into three layers:

Ist layer : The top layer of warm oceanic water is 500 m thick with 20-30 degrees of temperature. Within tropical region, this layer is present throughout the year, but in middle latitudes it is found only in summer season.

[box type=”shadow” align=”aligncenter” ]In Arctic and Antarctic circles, only one layer of cold water from surface to the ocean floor. [/box]

The average temperature of ocean surface water is 27 degrees Celsius.

The highest temperature is recorded slightly above the equator because of unequal distribution of land and water in the northern and southern hemisphere.

Maximum temperatures of the ocean is always at the surface because it directly receives heat from the Sun and the heat is transmitted to the lower sections of the oceans by the process of convection.

<< Read the list of Jnanpith award winners till date here>>